How jealousy can keep you away from God

How jealousy can keep you away from God

What and where does Jealousy come from?

I have two kittens at home. Both of them are adorable and at a stage where they want to play with everything. I have bought them a few toys, but so far their favourite is a rubber egg. They love it. They play with it for hours. Chase it, jump on it, share it….

Then one day while I was drinking a boxed drink. I threw my plastic straw down…One of the kittens went crazy. He loved the straw so much, took it and played and played with it. His sister also tried to play with her brother, but he was too excited and didn’t allow her anywhere near him or the straw. She forgot about the egg. She just went to a corner sat down and kept looking at him and then she looked at me. Of course she is just a kitten but if she were a human what would she be thinking? Why didn’t I get the straw first? Why is my brother being so selfish, why can’t he share it with me...I hope the straw hurts him…

The Merriam Webster dictionary defines jealousy as an unhappy or angry feeling of wanting to have what someone else has. Another definition that I like, it is an unhappy or angry feeling caused by the belief that someone you love (such as your husband or wife) likes or is liked by someone else. So in a nutshell jealously is not just thinking or imaging, but believing. It could be something physical – she is more beautiful. It could be material – he has more money than me, and it could be spiritual God loves him/her more than me.

Where does jealousy come from?

Jacob loved Joseph more than any of his other children because Joseph had been born to him in his old age. So one day Jacob had a special gift made for Joseph—a beautiful robe. But his brothers hated Joseph because their father loved him more than the rest of them. They couldn’t say a kind word to him.  Genesis 37

So to answer the question where does jealousy come from, it comes from a place of vulnerability, fear, and insecurity. Put your foot in any of the 10 brother’s shoes. How would you feel if your parents loved your brother or sister more than you? No matter what you did, or how hard you tried, your parents never acknowledged you but constantly praised your siblings. The hard part being that that your siblings were not even trying to get their attention or affection.

It was natural for the brothers feel a little down or sad. Probably from the time Joseph was born and throughout his growing years their father doted on him.  But if they took some time to look into the situation they would have realised that Joseph was innocent. They could have lovingly teased him about his dreams or teased him about being the favourite, but no. They had this burning jealousy towards him. It would have been a pretty lonely house to grow up in for Joseph.   Out of 10 brothers, not even one brother liked him. Instead he was stuck with 10 jealous and angry brothers. 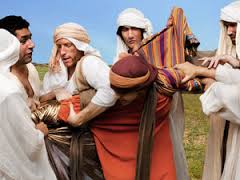 Joseph, you are too good for this robe

View all posts by: admin